Skip to Main Content
Digital Public Library of America
Primary Source Sets
Of Mice and Men by John Steinbeck
A photograph of an insane asylum, 1963.

In this photograph, men are laying on the floor, one with what appears to be a manacle on his leg. Conditions like this were common in insane asylums. George sees no choice but to kill Lennie because institutionalization was a horrific option. Photographer Richard Avedon’s photographs of the East Louisiana State Mental Hospital in Jackson, Louisiana helped with the 1963 institutional reform movement. Avedon planned to send the photographs to President Kennedy. This reform movement eventually led to the Community Mental Health Care Act. While the photograph was taken twenty-five years after the publication of Of Mice and Men, it shows that the treatment of patients had not improved.

Note: These citations are programmatically generated and may be incomplete.
Courtesy of National Museum of American History, Kenneth E. Behring Center via Smithsonian Institution. 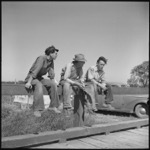