Fortieth Congress of the United States of America;
At the third Session,
Begun and held at the city of Washington, on Monday, the seventh day of December, on thousand eight hundred and sixty-eight.
A RESOLUTION
Proposing an amendment to the Constitution of the United States.

Resolve by the Senate and House of Representatives of the United States of America in Congress assembled,
(two-thirds of both Houses concurring) That the following article be proposed to the legislatures of the several States as an amendment to the Constitution of the United States, which, when ratified by three-fourths of said legislatures shall be valid as part of the Constitution, namely:
Article XV.
Section 1. The right of citizens of the United States to vote shall not be denied or abridged by the United States or by any State on account of race, color, or previous condition of servitude—
Section 2. The Congress shall have power to enforce this article by appropriate legislation—
Schuyler Colfax [[object Object]]
Speaker of the House of Representatives.
B F Wade [[object Object]]
President of the Senate pro tempore.

Note: These citations are programmatically generated and may be incomplete.
Courtesy of the National Archives and Records Administration.

An 1879 photographic portrait of Frederick Douglass. 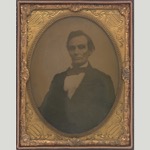 A photographic portrait of Abraham Lincoln, taken on October 11, 1858, two days before his sixth debate with Stephen Douglas.

An excerpt from the 1899 Charles Chesnutt biography of Frederick Douglass.

An excerpt from the 1847 Frederick Douglass speech given for the anniversary of the American Anti-Slavery Society.

The text of Frederick Douglass’s most famous speech, given in 1852, “What, to a slave, is the Fourth of July?”

A chapter describing Douglass’s early encounters with abolitionists, from his autobiography My Bondage and My Freedom, 1857.

An excerpt from a late nineteenth-century biography of Abraham Lincoln written by Noah Brooks.

The texts of two Lincoln speeches, one on the Dred Scott decision and the First Inaugural Address.

An 1888 reminiscence by Frederick Douglass about Abraham Lincoln.

Printed song lyrics to a song called “The Fifteenth Amendment,” circa 1870.

An 1876 speech given by Frederick Douglass at the unveiling of the Freedmen’s Monument in Lincoln Park, Washington, DC.

A photograph of Freedmen’s Statue, which was created by Thomas Ball, located in Lincoln Park in Washington, DC.