Skip to Main Content
Digital Public Library of America
News
A Pond Feeding a Lake Feeding an Ocean: Wake Forest University’s Perspective as a Contributing Institution to the DPLA

A Pond Feeding a Lake Feeding an Ocean: Wake Forest University’s Perspective as a Contributing Institution to the DPLA

Early in the process of envisioning the DPLA, Dan Cohen used the metaphor of a pond feeding a lake feeding an ocean to characterize its planned infrastructure. In a blog post he wrote, “one can think of this initial set of materials […] as content from local ponds—small libraries, archives, museums, and historic sites—sent through streams to lakes—state digital libraries […]—and then through rivers to the ocean—the DPLA.” This metaphor has deeply influenced Wake Forest’s understanding of our niche within the larger DPLA ecology. 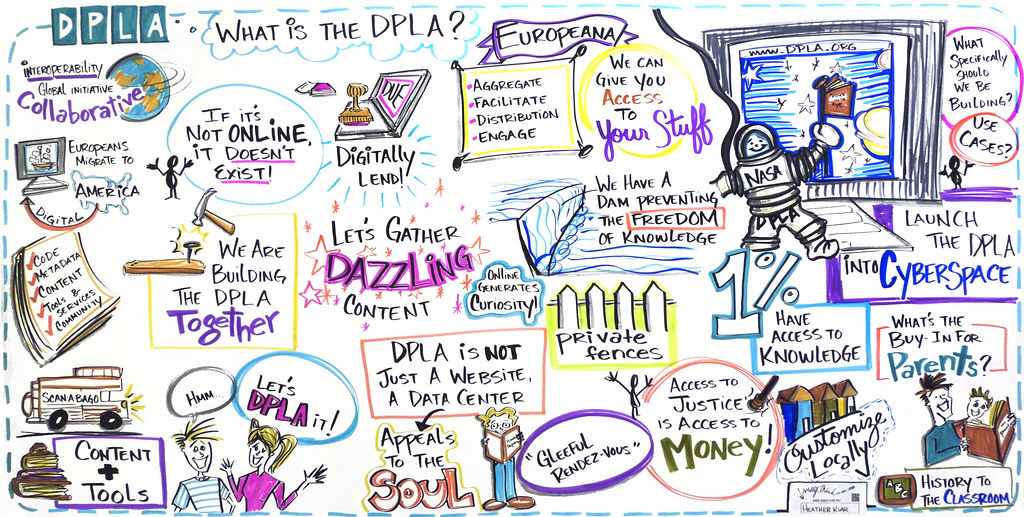 From the “Perspective on the DPLA” session at the 2011 DPLA Plenary Meeting. Art by Heather Klar of ImageThink. (CC BY-NC-ND 2.0)

The purpose statement of the DPLA that still resonates the most with me was made by Ed Summers, who attended an expert working group meeting of the DPLA in May 2011. Ed called attention to the phrase “generative platform for unspecified future uses” in the description of that working group and foregrounded it in his reflection about what the DPLA could be. By working with the grain of the Web and deep linking from dp.la to content as it appears on a contributing institution’s site, the DPLA facilitates research and knowledge creation. Despite this serious purpose, one of the primary use qualities of the DPLA, whether browsing dp.la or interacting with one of the apps built on top of its API, is sheer fun. (Historical cats, anyone?) We at Wake Forest want to expose our materials to the world, and we want to do it in a way that aligns with the Web and with this concept of a generative platform that enables people to make things.

Wake Forest University contributes digital collections to the DPLA via the North Carolina Digital Heritage Center, which became a service hub in November 2013. Because of its strong existing partnerships with academic libraries, public libraries, archives, museums, and historical societies in North Carolina, the Digital Heritage Center was a natural fit as a service hub for the DPLA. Last October, the Digital Heritage Center invited digital collection managers to a full-day informational meeting in Greensboro, NC with Emily Gore and Amy Rudersdorf of the DPLA so that we could learn more about the DPLA metadata model, the ingest process, and ask questions about the peculiarities of our digital collections. We at Wake Forest were really lucky to be in North Carolina where the relationship infrastructure is already in place. The technical infrastructure seems as though it would be the hard part, but it’s really not; the relationship infrastructure is the hard part, and it’s already well established in North Carolina.

From the start, our approach to participating in the DPLA has been iterative and incremental by design. This approach fits in well with the DPLA’s design process, which also drew inspiration from agile development methodologies. Memorably, for example, the call for participants in the DPLA beta sprint drew submissions that thoughtfully engaged all sorts of design problems from aggregating metadata to preserving an item’s context in its original collection to interfaces that facilitated serendipitous discovery. 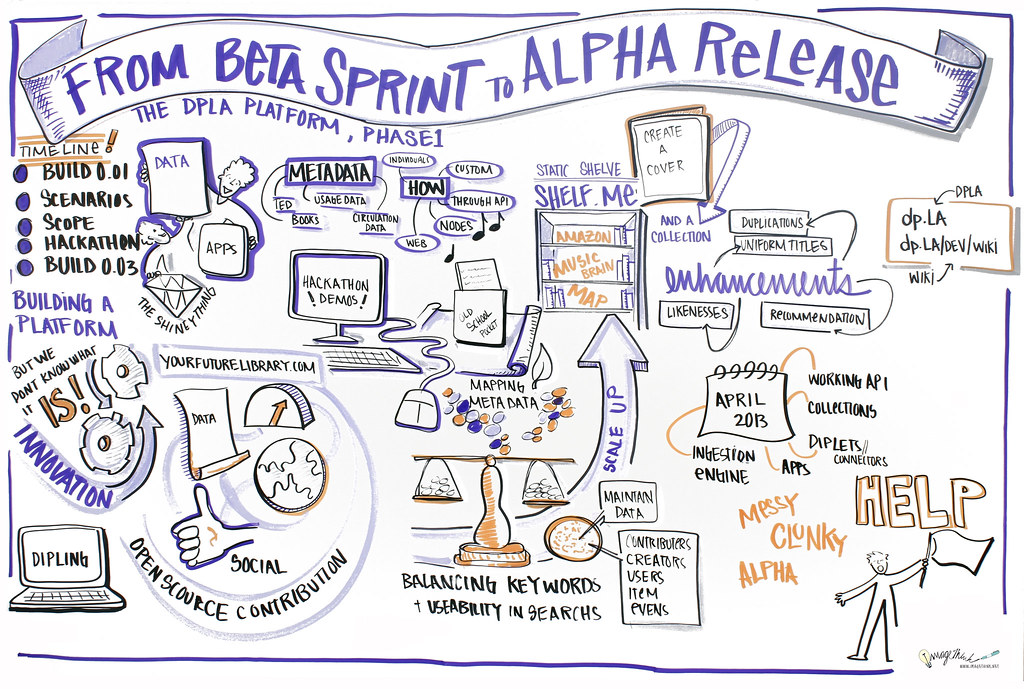 From the “From Beta Sprint to Alpha Release: The DPLA Platform, Phase I” session at the 2012 DPLA West Meeting. Art by Heather Willems of ImageThink. (CC BY-NC-ND 2.0)

For us, agile development is a loose framework for how we approached contributing to the DPLA, not necessarily a series of strict 4-week sprints. What’s valuable about this approach is defining a single priority that we focus on at the expense of all other possible priorities during one of our loosely defined development cycles. Some of these development cycles include:

…as well as, of course, never ending metadata cleanup.

Ultimately, our participation in the DPLA offers us not only increased traffic and the opportunity to assess and improve our digital collections metadata, but also — crucially — the ability to market our digital collections as data. We’re interested in exploring new ways to engage our publics, including events such a DPLA API workshop and hackfest for digital humanists on campus.

For us participating in the DPLA isn’t a once and done activity. We’re members of a movement!