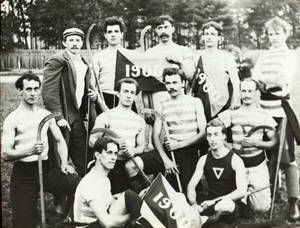 Lawn hockey was introduced to the Springfield Training School by Dr. McCurdy in the fall of 1896, and after a season of play the English rules were adopted. As of 1903, the school was the only place in the country to play the English game. The field is a little smaller than a football field. For more information on lawn hockey rules, see “The Games of Lawn Hockey, Tether Ball, Golf-croquet, Hand Tennis, Volley Ball, Hand Polo, Wicket Polo, Laws of Badminton, Drawing Room Hockey, Garden Hockey,” published by the American Sports Publishing Company (New York, New York) in 1903.