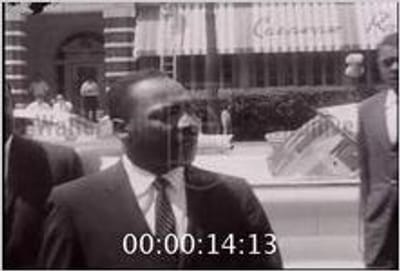 In this WALB newsfilm clip from July 27, 1962, Reverend Ralph D. Abernathy leads a kneel-in at city hall in Albany, Georgia, during which he prays for the community, its leaders, and the leaders of the civil rights movement before police arrest him and his fellow demonstrators. The clip begins with a silent portion in which groups of African Americans get out of cars near city hall and walk towards the building. Rev. Abernathy exits one of the cars in a group with Dr. Martin Luther King, Jr., Dr. William G. Anderson, Slater King, and Reverend E. James Grant; president, vice president, and member of the Albany Movement respectively. The demonstrators line up in front of city hall and are met by local police, led by Albany police chief Laurie Pritchett. Pritchett gives directions to his officers and to those in the kneel-in as cameramen and reporters surround the group. The sound portion begins with Pritchett informing the demonstrators that they are under arrest. King appears to ignore the statement and asks Abernathy to pray. Abernathy prays for the city of Albany; the city officials, including the mayor and chief of police; and the members of the police force. Pritchett then interrupts the prayer, directing his officers to round up the demonstrators. Abernathy continues to pray for peace in the community, and for a willingness in the city officials to negotiate with the leaders of the African American community. He prays that those attending the kneel-in will not feel hate or animosity, and for their leaders by name, including Anderson, King, and Reverend Benjamin Gay, chaplain of the Albany Movement, who is not seen. The end of Abernathy's prayer is not recorded. The clip continues with Pritchett again informing the group that they will be arrested if they do not leave. The demonstrators begin to move towards city hall and King stops to give a reporter a prepared statement he did not get to read. The clip ends with cameramen and reporters watching the demonstrators enter city hall. Abernathy, King, Anderson, and others came to city hall with the goal of speaking to the city commission; when they were informed that the city commission would not meet with them before the next meeting scheduled for August 7, they began to pray. A second kneel-in, led by Student Nonviolent Coordinating Committee (SNCC) leader Charles Jones, took place at city hall later in the day; the participants in that event were also arrested.

The Civil Rights Digital Library received support from a National Leadership Grant for Libraries awarded to the University of Georgia by the Institute of Museum and Library Services for digital conversion and description of the WALB News Film collection.