Historical sketch of the rebellion 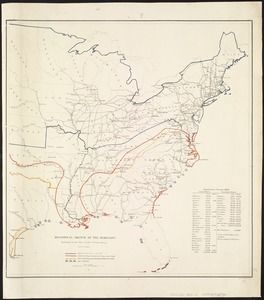 This date is inferred.

In pursuing Scott’s broad geographic objectives, Union armies made substantial progress in blockading the southeastern coastline and occupying the Mississippi River. This tactic created an economic hardship by greatly diminishing commerce with Europe. With control of the Mississippi Valley, they split the Confederacy, cutting off supply routes particularly from Texas and Arkansas. In order to demonstrate the progress of this strategy, the U.S. Coast Survey published at least seven maps with the same title, “Historical Sketch of the Rebellion,“ each delineating Union military progress. By early 1864, the North had gained control of the entire Mississippi River Valley, blocked most southern ports, and had occupied much of the Texas, Georgia, South Carolina, North Carolina and Virginia coastal areas.