Enemy Activities - Officers - Lest we forget 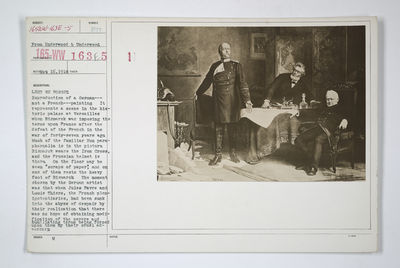 Original Caption: Lest we forget. Reproduction of a German -- not a French -- painting. It represents a scene in the historic palace at Versailles when Bismarck was imposing the terms upon France after the defeat of the French in the war of forty-seven years ago. Much of the familiar Hun paraphernalia is in the picture. Bismarck wears the Iron Cross, and the Prussian helmet is there. On the floor may be seen "scraps of paper," and on one of them rests the heavy foot of Bismarck. The moment chosen by the German artist was that when Jules Favre and Louis Thiers, the French plenipotentiaries, had been sunk into the abyss of despair by their realization that there was no hope of obtaining modification of the severe and humiliating terms being forced upon them by their cruel adversary. Photographer: Underwood and Underwood