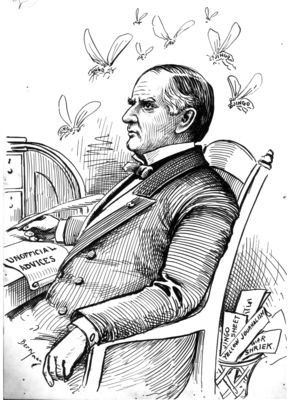 This illustration entitled "Pesky, but Harmless", by cartoonist Clifford Berryman, which appeared in the Washington Post on March 4, 1898, depicts President William McKinley, not wanting to wage war in Cuba, following the sinking of the USS Maine, being bothered by "jingo gnats", representing "jingoism" or "yellow journalism", failing in their attempt to sway him into a pro-war direction.