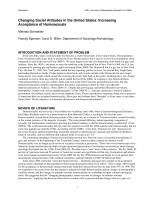 form of homosexuality dates back to at least the Greco-Roman period, but is seen as a new form of prejudice when compared to racism and sexism (Fone 2000:7). We have begun to see the very beginning of the battle for gays and lesbians. Since the 1950’s, and more so since the rebellion at the Stonewall Inn in New York in 1969, the U.S. has experienced a growing gay and lesbian rights movement (Fone 2000). The Stonewall Inn is a gay bar in New York City. On June 27, 1969, New York police raided the Inn expecting patrons to leave, but instead they fought back, barricading themselves inside. People began to shout back, and crowds outside of the Stonewall Inn grew larger. Some arrests were made, which caused the crowd to physically fight back at the police, breaking into a riot. People continued to riot for three days after the police raided the Inn (Fone 2000). In response to the Stonewall Riots, “liberation produced a new gay culture which took root in the form of protest and political act

Published as part of the University of Wisconsin-La Crosse Journal of Undergraduate Research, Volume 7 (2004)