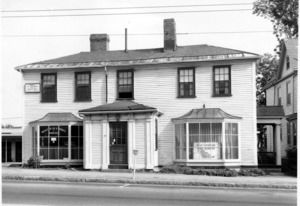 Captain John Fowle house, 49 Main Street,ca.1785. Photographed by W.C. Woodman, 1961. Sign on front says: "House of Capt. John Fowle 1756-1824 Member of the staff of Lafayette's Command. Yorktown" This officer served with credit and reputation during the whole of the Revolutionary war. At the time the Marquis de Lafayette was ordered to the southwest to oppose the progress of the army of Lord Cornwallis, Capt. Fowle was selected as one of the officers. Under that distinguished command he served, and endured all the dangers incident to that campaign. When the army under the command of General Washington formed a junction with the Marquis at Yorktown, Capt. Fowle continued to serve on the Light Infantry, and his company composed a part of the detachment under the command of the Marquis, which stormed Lord Cornwallis's advanced redoubts and enabled General Washington to advance and take such a position as compelled his lordship to surrender. He was one of the original members of the Society of the Cincinnati, and one of its Standing Committee. He was Adjutant, Lieutenant, and Captain in Smith's third regiment, and Adjutant and Lieutenant in Wiggleworth's thirteenth regiment in 1777-78. In the following year, he was in Sullivan's Rhode Island Campaign. He was commissioned Captain in same regiment, 20 Jun 1779, and in Mellen's third regiment in 1783. He was selectman in Watertown from 1790-92, and again in 1820, and died in that town, 31 Dec 1823. In the windows to says: left, "Watertown Press". right, Scott Carisle Public Accountant Taxes, Systems, Auditing, Bookkeeping