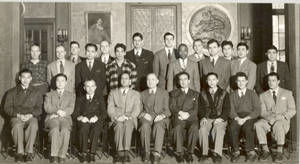 Theodore A. Weil was born in Wiljandi, Estonia on March 2, 1893. During World War I, he served in France as a Sargent in the field artillery. Weil worked at American International College from 1932 until 1946, when he began teaching history and international relations at Springfield College. Based on Catalog listings, Weil appears to have left Springfield College 1960.