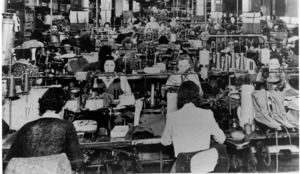 Hood Rubber Company -- Watertown (Mass.) during World War II. Work force working on military boots. Frederic and Arthur Hood, trained under their father and after the U.S. Rubber Co. failed in Franklin and Chelsea, MA, founded a factory in 1896 in East Watertown. During the early years, Hood hired many immigrant Armenians and was mainly responsible for the development of East Watertown into an Armenian neighborhood. Hood had its own auxiliary fire department and alarm system. It took half an hour to cover hood?s 88 acres. By 1920, the company employed ten thousand men and women. Hood encouraged employees to attend Americanization classes and established a settlement house known as the Abraham Lincoln House. Employee turnover was exceptionally low and good relationship with the Company existed. Hood produced rubber footwear, gloves, floor tiles, battery boxes, and a variety of hard rubber and plastic-coated products. In 1920, Hood?s tire division, which had started in 1906, was making 35,000 tires a day and the footwear division over 70,000 pairs of shoes daily -- ranked first in New England and third in the United States. During WWII, the Company manufactured bullet-proof fuel cells, de-icers for aircraft, plastic helmet liners and aviation boots. The Town and the Company went to Washington D.C. to fight for the Tariff Act of 1955 to which allowed the Company to continue in business. Many a Watertown family became test subjects, as rubber sole shoes were given to the children, to use for one year. They shoes were then returned to Hood for evaluation. Each child would line up and hope to have the correct shoe size being given out that year. B.F. Goodyear purchased Hood Rubber Company in 1929 and Hood became one of their divisions for footwear and Hood tires? division was moved to Akron, Ohio. Hood Rubber paid 10% of the taxed revenue in the Town. Hood Rubber Company closed in 1969.