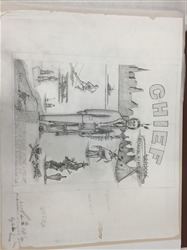 Pencil drawing on paper with Eugene Standingbear at center. Right side of drawing has life experiences in his native culture including in the Wild Wst show, hunting, dancing and traditional dress. The left side of the drawing has his life in the Anglo world. On this die he wears a suit and has images of city life, his life as a fisherman, running track at Haskell, flying planes, playing golf, drinking and working as a miner.Front "Chief" and "Experiences in the Life of Eugene Standingbear an Oglala Sioux from Pine Ridge S.D." Back "Book Cover Sketch"