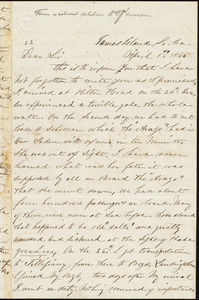 Peter Laws writes Francis Jackson Garrison relaying the tale of his journey by sea to South Carolina, and the commencement of his duties in his regiment as part of the Massachusetts Colored Infantry troops taking part in the Union occupation of South Carolina. Laws states that they encountered many soldiers belonging to General Sherman's army, calling them a "hard set of fellows", and noting that many of them had never encountered an African American soldier before, let alone heard of the 55th Massachusetts Volunteers. Laws recounts a brief skirmish with Confederate troops on James Island which ended with the retreat of the rebel troops, and recounts the reception they received from former slaves upon arrival in Charleston, South Carolina, stating that the latter "Jumped, Shouted, Bawled, Danced, Sung, Swore, and prayed, apparently at the same time and in one breath".