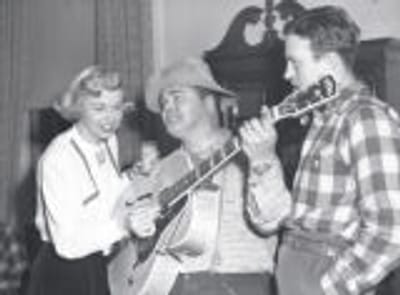 Pictured from left to right: Doris Day with two entertainers at an event in Nashville, Tennessee. Bob Hope brought his revue of outstanding stage artists for two shows Sunday January 16th, 1949 at the Ryman Auditorium, with featured singer Doris Day. Other stars with the Hope company included a troupe of 40 radio stars and musicians. When Bob Hope’s plane arrived at Berry Field, they were met at the airport by Mayor Thomas L. Cummings and other officials. Hope received a special welcome to Nashville with keys to the city. The day of entertainment included Hope and troupe giving special performances for patients at Veterans Administration hospital on White Bridge road. Following the night show at the Ryman, the troupe was entertained at the Colemere Club, with city, civic, political and business leaders. Forms part of Record Group 412, Photographs Collection. 1 photograph negative : b & w ; 4 x 5 in.