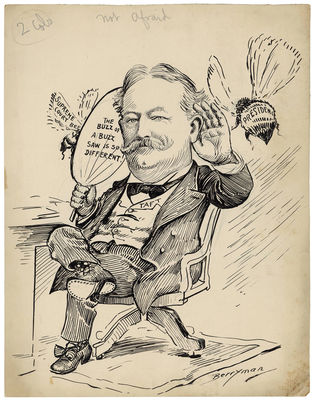 This cartoon depicts William Howard Taft being enticed towards a run for the Presidency. As Secretary of War, Taft told President Theodore Roosevelt that his highest ambition was to serve as Chief Justice of the U.S. Supreme Court. But Roosevelt hoped Taft would run in the 1908 election as his successor if Roosevelt followed through on his promise not to run for President again. With Roosevelt's encouragement, Taft began to consider the option. In this cartoon Taft blocks the buzz of a potential Supreme Court nomination to better hear the enticing buzz of the Presidential bee. Berryman speculates that Taft may be succumbing to Roosevelt's wishes and is "not afraid" of running for President.