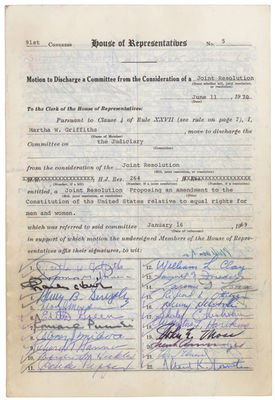 From 1923 to 1970, some form of the Equal Rights Amendment was introduced in every session of Congress but was generally held up in committee and so never put to a vote. Representative Martha Griffiths's petition forced the legislation out of committee so that it could be considered by the House, which passed it. The Senate subsequently attempted to add provisions exempting women from the draft, effectively preventing the bill from passing Congress that session.

Creator
U.S. House of Representatives. Office of the Clerk of the House. 4/1/1789