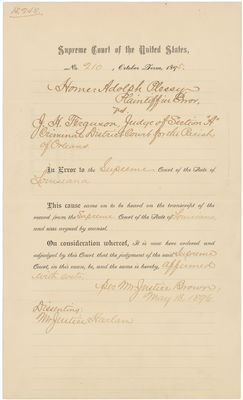 During the era of Reconstruction, black Americans' political rights were affirmed by three constitutional amendments and numerous laws passed by Congress. Racial discrimination was attacked on a particularly broad front by the Civil Rights Act of 1875. This legislation made it a crime for an individual to deny "the full and equal enjoyment of any of the accommodations, advantages, facilities, and privileges of inns, public conveyances on land or water, theaters and other places of public amusement; subject only to the conditions and limitations established by law, and applicable alike to citizens of every race and color." In 1883, the Supreme Court struck down the 1875 act, ruling that the 14th Amendment did not give Congress authority to prevent discrimination by private individuals. Victims of racial discrimination were told to seek relief not from the Federal Government, but from the states. Unfortunately, state governments were passing legislation that codified inequality between the races. Laws requiring the establishment of separate schools for children of each race were most common; however, segregation was soon extended to encompass most public and semi-public facilities. Beginning with passage of an 1887 Florida law, states began to require that railroads furnish separate accommodations for each race. These measures were unpopular with the railway companies that bore the expense of adding Jim Crow cars. Segregation of the railroads was even more objectionable to black citizens, who saw it as a further step toward the total repudiation of three constitutional amendments. When such a bill was proposed before the Louisiana legislature in 1890, the articulate black community of New Orleans protested vigorously. Nonetheless, despite the presence of 16 black legislators in the state assembly, the law was passed. It required either separate passenger coaches or partitioned coaches to provide segregated accommodations for each race. Passengers were required to sit in the appropriate areas or face a $25 fine or a 20-day jail sentence. Black nurses attending white children were permitted to ride in white compartments, however. In 1891, a group of concerned young black men of New Orleans formed the "Citizens' Committee to Test the Constitutionality of the Separate Car Law." They raised money and engaged Albion W. Tourgée, a prominent Radical Republican author and politician, as their lawyer. On May 15, 1892, the Louisiana State Supreme Court decided in favor of the Pullman Company's claim that the law was unconstitutional as it applied to interstate travel. Encouraged, the committee decided to press a test case on intrastate travel. With the cooperation of the East Louisiana Railroad, on June 7, 1892, Homer Plessy, a mulatto (7/8 white), seated himself in a white compartment, was challenged by the conductor, and was arrested and charged with violating the state law. In the Criminal District Court for the Parish of Orleans, Tourgée argued that the law requiring "separate but equal accommodations" was unconstitutional. When Judge John H. Ferguson ruled against him, Plessy applied to the State Supreme Court for a writ of prohibition and certiorari. Although the court upheld the state law, it granted Plessy's petition for a writ of error that would enable him to appeal the case to the Supreme Court. In 1896, the Supreme Court issued its decision in Plessy v. Ferguson. Justice Henry Brown of Michigan delivered the majority opinion, which sustained the constitutionality of Louisiana's Jim Crow law. Indeed, it was not until the Supreme Court's decision in Brown v. Board of Education of Topeka, Kansas and congressional civil rights acts of the 1950s and 1960s that systematic segregation under state law was ended. In the wake of those Federal actions, many states amended or rewrote their state constitutions to conform with the spirit of the 14th Amendment.