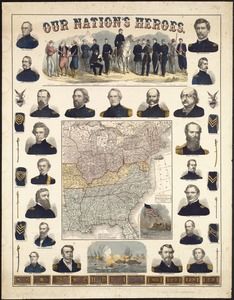 Torn in Two exhibition: Most likely published as a commemorative souvenir fostering northern patriotism, this colorful broadside displays an array of graphic illustrations intended to appeal to a living room audience. The central focus is a small map of the eastern United States. Although it does not identify the Confederate states as a separate nation, the seceded states were colored blue and the border slave states which did not secede yellow. The marginal illustrations include portraits of 21 Union generals and commodores, as well as a variety of military memorabilia. There are also three vignettes – one depicting fourteen soldiers dressed in different Union uniforms, another illustrating the battle between the two ironclad ships Monitor and Merrimack, and the third, a symbolic representation of the Star-Spangled Banner flying gloriously over a battle scene. Dealer's description: Broadside map relating to the Civil War, with twenty-one portraits of Union generals and commodores surrounding map. Each portrait is vividly hand colored in Union blue. Generals included are Grant, McClellan, Fremont, Halleck, McDowell, Pope, Burnside and Buell, as well as Commodore Farragut. The vignette along the top depicts several soldiers in the uniforms of units of various states. Swords and various insignia - epaulets and shoulder broads - are illustrated with the ranks associated with them. At bottom center is a depiction of the encounter of the Monitor and the Meriimac in 1862.