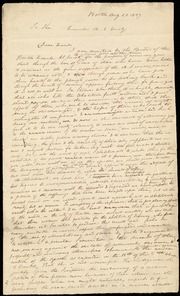 Anne Warren Weston has been directed by the Board of the Boston Female Anti-slavery Society to address the members at this time to assure them that, while "the hearts of many appear failing them for fear, yet it is not so with us." It is a solemn duty to renew our vows of consecration to the cause of the American slave." The main body of this epistle is concerned with the public appearances of women as abolitionists. Opponents of women's public speaking base their strictures on St. Paul's 5th chapter of Timothy. She is not surprised at this. "The theologians who justify the enslaving of a certain portion of their fellow men ... are the very people whom we might naturally expect to find perverting the same sacred oracles ... to sanction the doctrines of woman's & subordination." She emphasizes that this point of view is harmful to a man's character. She sets forth the two differing opinions among women, one favoring dependence and subordination, the other, while cheerfully fulfilling its domestic obligations, is not prepared to declare in favor of subservience. The right social intercourse between men and women is destroyed not through a false position occupied by some of womankind, but by "mankind remaining in one." She now calls attention to the Misses Grimke: "We feel it to be both a duty & privilege to utter our convictions relative to their heroic & noble career." Starting from the attempt being made to injure the effect of the Grimkes' appeals through criticism of their addressing mixed assemblies, Anne argues against a literal and narrow interpretation of the words of St. Paul. She points out the "false code of morals adopted by ... what is commonly called 'good society'" as naturally at variance with the conduct she is defending and trusts that all women who have embraced the anti-slavery cause "will feel that touching this question they owe a responsibility not to man, but to God alone." She dwells on the abuse of slave women in the South

Partner
Internet Archive
Contributing Institution
Boston Public Library
Publisher
Boston
Subjects
Weston, Anne Warren, 1812-1890
Grimké, Angelina Emily, 1805-1879
Grimké, Sarah Moore, 1792-1873
Boston Female Anti-slavery Society
Antislavery movements
Women abolitionists
Language
English
URL
http://www.archive.org/details/lettertofemaleas00west
Rights
Access to the Internet Archive’s Collections is granted for scholarship and research purposes only. Some of the content available through the Archive may be governed by local, national, and/or international laws and regulations, and your use of such content is solely at your own risk