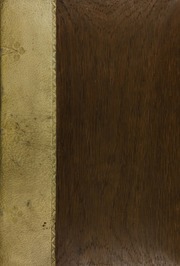 Title from head of text

Layout: Written in 2 columns of 32 lines below top line; ruled in ink with double inner and outer vertical bounding lines

Decoration: Flourished initials in blue and red at major divisions

Item catalogued from existing description: Schullian, Catalogue of Incunabula and Manuscripts in the Army Medical Library; and in hand by National Library of Medicine, History of Medicine Division, 04/2004

Exhibited: "And there's the humor of it: Shakespeare and the four humors," National Library of Medicine, Bethesda, Md., January 30 to August 17, 2012

Partner
Internet Archive
Contributing Institution
U.S. National Library of Medicine
Supporting Institution
Medical Heritage Library
Publisher
France
Subjects
Animals
Birds
Language
Latin
URL
http://www.archive.org/details/101141503.nlm.nih.gov
Rights
Access to the Internet Archive’s Collections is granted for scholarship and research purposes only. Some of the content available through the Archive may be governed by local, national, and/or international laws and regulations, and your use of such content is solely at your own risk