Panoramic view of the Gettysburg battlefield 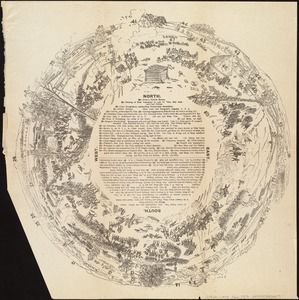 The three-day engagement that occurred at Gettysburg, July 1-3, 1863, is considered the turning point of the War. Our memory of the war’s most significant battle is reinforced by approximately 150 maps that have been published in the years following the conflict, far more than any other battle. One of the most unusual is this untitled and undated diagram that provides an unconventional fish-eye or 360-degree panoramic view of the battlefield. In the center of this circular, pictorial diagram is a numbered legend identifying 57 landmarks, locations of specific regiments, or sites of selected casualties.