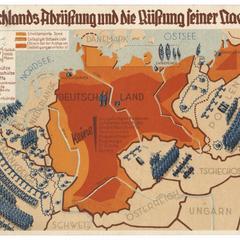 The imbalance of armed forces in Europe is the subject of the colorful graphics on this postcard. Germany's disarmament, as required by the Treaty of Versailles, left it exposed to the superior forces of its neighbors, east and west. In 1934, the year this card was mailed, Hitler began unilaterally to rearm Germany and increase its military forces.

Partner
Recollection Wisconsin
Contributing Institution
University of Wisconsin Digital Collections
Subjects
Germany
Type
image
Format
Postcard
Language
German, German
URL
https://digital.library.wisc.edu/1711.dl/GH623PWAC6BH683
Standardized Rights Statement
Copyright Undetermined:The copyright and related rights status of this Item has been reviewed by the organization that has made the Item available, but the organization was unable to make a conclusive determination as to the copyright status of the Item. Please refer to the organization that has made the Item available for more information. You are free to use this Item in any way that is permitted by the copyright and related rights legislation that applies to your use.