Skip to Main Content
Digital Public Library of America
All items
The Dis-United States. Or the Southern Confederacy

The Dis-United States. Or the Southern Confederacy 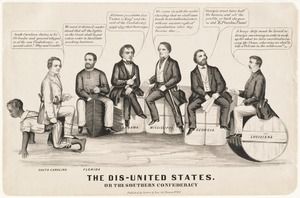 The Confederate leaders are portrayed as a band of competing opportunists led by South Carolina governor and secessionist Francis Pickens (far left). The artist criticizes the January 1861 secession of five states from the lower South, following the lead of South Carolina, which had formally declared its independence a month before. Armed with a whip and a pistol, Pickens sits on the back of a young slave, pronouncing, "South Carolina claims to be file leader and general whipper in of the new Confederacy, a special edict! Obey and tremble!" The other leaders are also armed. Pickens's tyranny is met by expressions of self-interest from the other confederates. The nature of these individual interests are conveyed pictorially and in the text. Leaders from Alabama, Mississippi, and Georgia sit on bales of cotton, while Florida and Louisiana sit on a wrecked ship's hull and a barrel of sugar respectively. Florida (represented by a bearded man, possibly Stephen R. Mallory, senator and later secretary of the Confederate navy ): "We want it distinctly understood that all the lights on the Coast will be put out, in order to facilitate wrecking business." Alabama (William L. Yancey): "Alabama proclaims that C̀otton is King,' and the rest of the Confederacy "must obey" that Sovereign. Mississippi (Jefferson Davis): "We came in, with the understanding that we shall issue bonds to an unlimited extent, with our ancient right of repudiation when they became due." Georgia (Governor Joseph E. Brown): "Georgia must have half the honors, and all the profits, or back she goes to old Pluribus Unum.'" Louisiana (a mustachioed man): "A heavy duty must be levied on foreign sweetening in order to make up for what we have sacrificed in leaving the Union, otherwise we shall be like a P̀elican in the wilderness!'" Although Texas, which seceded on February 1, is not represented here, the print probably appeared at the time of the Montgomery convention in early February when the Confederate States of America was formed, but before Jefferson Davis assumed its presidency. Texas did not attend that convention.