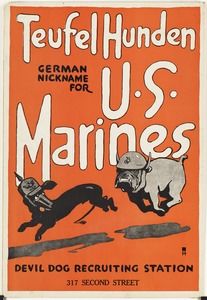 The tradition of using an English bulldog as a mascot for the United States Marine Corps has its roots in the fighting campaigns of World War I. It is not an image that comes from the Marine Corps, but instead, from the hard won respect of their foes. German reports referred to the attacking Marines as "teufel hunden," meaning devil dogs, because of their tenacity and fighting ability. Teufel hunden were the vicious, wild mountain dogs of Bavarian folklore.