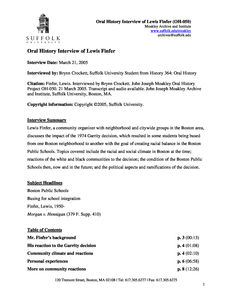 Lewis Finfer, a community organizer with neighborhood and citywide groups in the Boston area, discusses the impact of the 1974 Garrity decision, which resulted in some students being bused from one Boston neighborhood to another with the goal of creating racial balance in the Boston Public Schools. Topics covered include the racial and social climate in Boston at the time; reactions of the white and black communities to the decision; the condition of the Boston Public Schools then, now and in the future; and the political aspects and ramifications of the decision.