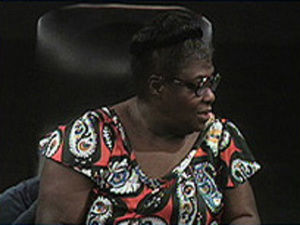 In this clip Elma Lewis, Director of the National Center of Afro-American Artists, reads the poem "Sympathy" by Paul Lawrence Dunbar to a group of children and then asks them what they think the poem means. Overall the program is divided into two halves: the first featuring a 30-minute in-studio poetry reading by Elma Lewis, the second of magazine-style segments. Elma Lewis, Director of the National Center of Afro-American Artists, seated with children around her, talks about what poetry is, what a poem can make you feel, and why people used to write in rhymes. Lewis focuses on two African American poets, Langston Hughes (who is "of this time") and Paul Lawrence Dunbar, and reads selections from each. The second half contains the following segments: a mime performance by Halim Adbur Rashid (Fred Johnson) titled "The Writer," "Access" (with A.D. Saunders, who describes the Boston Jazz Society), "The Word" (with professor and historian A.B. Spellman, who comments on Black History Week), the "Community Calendar," "Information" (on Minority Recruitment Month for the Peace Corps), and "Commentary" by Producer Marita Rivero. Original air date estimated. Directed by Conrad White.