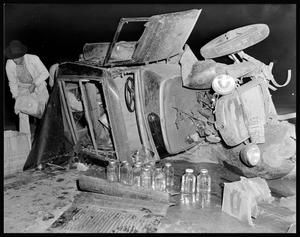 Photo of an overturned bootleggers truck in Anderson County. This photo is possibly related to the wreck mentioned in the article below, which was found in the Palestine Daily Herald Newspaper on 23 December 1933. Shorty Burnett Makes Bond Today In Fatal Mishap Walter Wiley Killed In Climax of Chase Last Night By Officers; Big Liquor supply Is Found W.S. "Shorty" Burnett, local white man, posted $1000 bond in Justice A.G. Moore's court today on a charge of transporting intoxicating liquor growing out of a chase on highway 1? late last night that enuminated in the death of Walter "Moon" Wiley, 43, local painter and paperhanger. Wiley's neck was broken and chest crushed in an automobile chase that started near the city airport. He died upon reaching the Speegle-Dupuy Hospital in an ambulance. Wiley and another man, believed to be Burnett, were riding toward Palestine in a 1922 model Chevrolet coach when Deputy Constables John Neal and Olin Farish started after them. According to officers' story, Neal and Farish hailed the occupants of the fleeing car demanding them to stop, instead the car increased its speed and the driver made other efforts to prevent the officers from driving alongside, it was stated. When about six miles from Palestine, the car occupied by Wiley and the second man met another car headed west. Apparently blinded by the approaching machine the car in which Wiley was riding swerved to the right leaving the concrete and overturning. Wiley's companion crawled out of the wreckage and fled through the woods, officers said. About 1:25 a.m., Burnett's car was reported stolen from his garage. Officers said it was Burnett's car they were chasing. Burnett is under indictment for possession of intoxicating liquor and his trial has been set for next week. Following the fatal accident, officers who had been chasing the car stopped and pulled Wiley from the wreckage. He was unconscious and was taken to the hospital as soon as an ambulance could arrive. Officers reported finding 26 half gallon fruit jars of whisky in the accident car. They also found 17 fruit jar tops from jars that had been smashed by the impact. Wiley's clothing was saturated in liquor investigators said and liquor flowed freely from the overturned machine. Wiley had been a resident of Palestine for many years and could be seen most every day in the business district. Funeral services were set for 4:30 o'clock this afternoon at his home, 906 West Lacy street with Rev J.C. Welch of the First Christian church officiating. Burial will be in the New Addition cemetery. Survivors are his mother and two sisters, Miss Hazel Wiley and Mrs. James Coleman, both of Palestine.