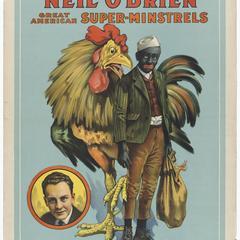 The image shows a man in blackface with a giant rooster in the background. In the lower left corner, the actor Jack "Smoke" Gray is pictured without blackface. The caption reads "Neil O'Brien and the great American super-minstrels."

O'Brien (c. 1869-1954) began as the endman in Lew Dockstader's Minstrels. He appears as an actor in several quasi-Shakespearean productions and farces in the early years of the century, and went solo after 1915. A recording of him singing with James J. Corbett is available on "The Monarchs of Minstrelsy."