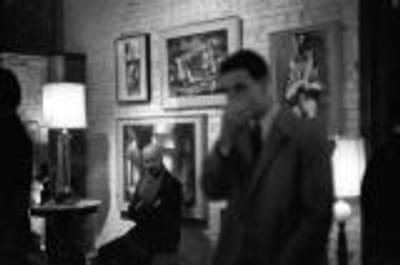 This image is part of the Thelma Blumberg Collection. Born in St. Louis, Missouri in 1920, Thelma Blumberg was an award winning freelance photojournalist who learned about cameras while serving in the U.S. Navy Women's Reserve during World War II. Following her service, she studied photography at the Chicago Institute of Design and the Art Center in Los Angeles. In the 1950s and 1960s, Blumberg returned to St. Louis and created a large volume of photographs documenting the neighborhood and nightlife near the intersection of Olive and Boyle. Known as Gaslight Square, the area changed from a quiet antique row into one of the country�s most popular entertainment districts, known for music, poetry, comedy, formal and informal dining, and dancing, and was the home to many clubs and restaurants, and entertainment venues. Blumberg's photography appeared in the Sunday Magazine section of the St. Louis Globe Democrat, in the St. Louis Scene Magazine, and in St. Louis Magazine. She passed away in St. Louis in 2012 at the age of 91.