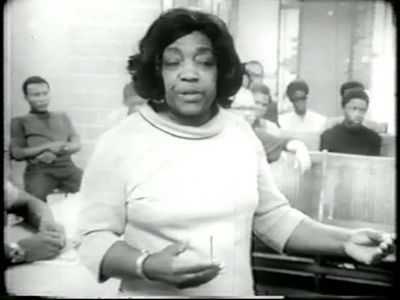 Documentation of a meeting that was organized by the Hartford Black Panthers in the aftermath of the third consecutive summer of riots. The meeting took place in late June 1969, at SAND school on Main Street in the Clay Arsenal neighborhood of the North End of Hartford. Members of the Hartford Black Panthers Party (BPP) sit at a table in the front of the room. The meeting is led by Don Miles; attendees include Charlie Perry, Larry Townsend of the Bridgeport Black Panther Party, and Rev. Clifton of the Urban Religious Coalition. North End residents, religious leaders, white and black, including Trinity students who participated in the North End Community Action Project (NECAP) sit in the audience. People stand and speak about what they witnessed during the riots that took place in the North End of Hartford between June 4 and June 7, 1969, including young people throwing bricks in the windows of stores and policemen blockading the North End from the downtown area, arresting people indiscriminately, and teargassing neighborhoods without considering the impact on families, including children, who were not involved in the rioting. Among the arrested was Black Panther leader Butch Lewis, who is not present at the meeting. Conversations also include lack of communication between the downtown power structure and North End residents as well as issues around dilapidated housing. Other people who speak and identify themselves include: Rev. Franks, Jim Rogers, Muriel Johnson, Annette Carter, Councilman Martin, Rev. Goode, and a member of the Human Relations Commission, whose name is not provided.