Model of the Arbella 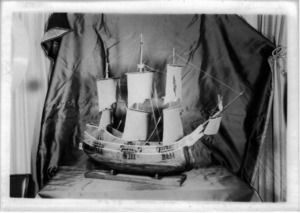 Model of the Arbella/ Arabella at First Parish Unitarian Church. The Winthrop Fleet was a group of eleven sailing ships under the leadership of John Winthrop that carried approximately 700 Puritans plus livestock and provisions from England to New England over the summer of 1630. The Arbella/ Arabella as the flagship for the fleet. The ship was at first known as the Eagle. Its name was changed in honor of Lady Arbella Johnson, who was a member of Winthrop's company, along with her husband, Isaac Johnson. Lady Arbella was the daughter of Thomas Clinton, 3rd Earl of Lincoln. Lady Arbella had died at Salem in August 1630 after the arriving two days earlier. Isaac Johnson died the richest man in the colony.