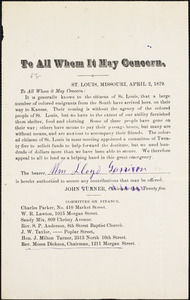 In this printed letter addressed "To All Whom It May Concern," John Turner, Chariman of the Committee of Twenty-five, reports "that a large number of colored emigrants from the South have arrived here on their way to Kansas." He explains that the African-American citizens of St. Louis have tried to supply these people with "shelter, food, and clothing" as "many are without means ..." As a result, this Committee of Twenty-five has been appointed "to solicit funds to help forward the destitute, but we need hundreds of dollars more than we have been able to secure." The letter authorizes William Lloyd Garrison, as its bearer, "to secure any contributions that may be offered." The organization's Committee on Finance lists notable African-American leaders, including James Milton Turner and Moses Dickson.