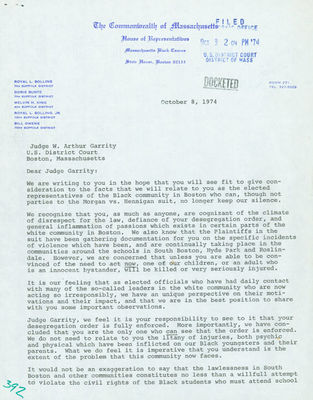 This document consists of a letter from the Massachusetts Black Caucus of the Commonwealth of Massachusetts House of Representatives to U.S. District Judge W. Arthur Garrity, Jr., requesting that he issue orders regarding federal troops, contempt citations against public officials and private citizens, and adding the names of the Boston City Councillors as defendants in the Morgan v. Hennigan school desegregation case.

Creator
U.S. District Court for the District of Massachusetts. 1789

Partner
National Archives and Records Administration
Contributing Institution
National Archives at Boston
Collection
Records of District Courts of the United States
Tallulah Morgan et al. vs James W. Hennigan et al. Case File
Document #s 383-408, 9/30/1974 - 10/21/1974
Subjects
Judges
Federal judges
Court orders
Legislators
Public officers
Schools
Public schools
School integration
African Americans
Location
Massachusetts
Boston (Mass.)
Type
text
Format
Letters (Correspondence)
Paper
Loose Sheets
URL
http://catalog.archives.gov/id/4713898
Standardized Rights Statement
No Copyright - In the United States:The organization that has made the Item available believes that the Item is in the Public Domain under the laws of the United States, but a determination was not made as to its copyright status under the copyright laws of other countries. The Item may not be in the Public Domain under the laws of other countries. Please refer to the organization that has made the Item available for more information.
Rights
Unrestricted