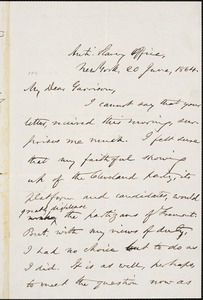 Oliver Johnson writes to William Lloyd Garrison remarking that he is not suprised by Garrison's letter, he "felt sure that my faithful showing up of the Cleveland [Radical Republican nominating] party, its platform and candidates, would greatly displease the partizans [sic] of Fremont." Johnson says he "await[s] the action of the [Executive] Committee [of the American Anti-Slavery Society] with the composure natural to one who feels that he has done right." He tells Garrison that he even had a dream where he "saw myself arraigned before the Committee by [Wendell] Phillips who seemed angry enough to blast me." Johnson hopes the Committee will "delay action" until he can meet them, but he says that if he is "required either to set the Standard in opposition to Lincoln's election, or to suppress my honest convictions in regard to the Fremont movement, its candidates, and platform, I shall resign the editorial chair."