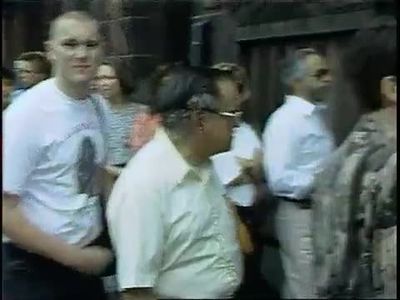 This news footage covers the August 1st, 1990 opening of the controversial Robert Mapplethorpe exhibit at the Institute of Contemporary Art (ICA) in Boston. While art advocates successfully defended the nudity in the exhibit as an free expression of speech, opponents claimed the photos were obscene and should have been censored. This footage shows the competing protests over the exhibit during its opening, as well as interviews with patrons about their expectations and experience of the exhibit. Ten O'Clock News was a nightly news show, featuring reports, news stories, and interviews on current events in Boston and the world.