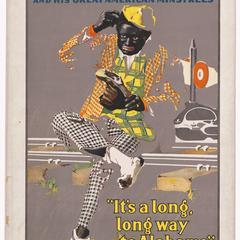 Across the top reads "Oscar F. Hodge presents," under which is larger blue letters is "Neil O'Brien." Below this follows "and his great American minstrels." The image portrays O'Brien, in blackface, sitting alongside a railroad track and inspecting the large hole in his boot while he scratches his head. The caption at bottom reads "'It's a long way to Alabama' Neil O'Brien."

O'Brien (c. 1869-1954) began as the endman in Lew Dockstader's Minstrels. He appears as an actor in several quasi-Shakespearean productions and farces in the early years of the century, and went solo after 1915. A recording of him singing with James J. Corbett is available on "The Monarchs of Minstrelsy."