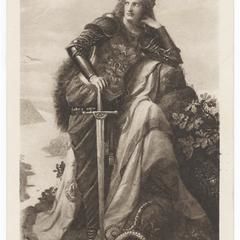 Not all Germans were ready to accept defeat at the end of the war, much less the settlement which was imposed upon them at Versailles and signed on the twenty-eighth day of June 1919, the fifth anniversary of the assassination of Franz Ferdinand at Sarajevo. The German army, many felt, had been "stabbed in the back," and never should have been forced to sign the armistice. As for the treaty which followed, its provisions exceeded Germany's worst expectations. A "Diktat," as it was called (or a dictated treaty) which imposed, among so many crippling particulars, extensive territorial losses, excessive reparations, and, to justify the settlement's extremes, acceptance of a humiliating guilt.

The bitter resentment which many Germans felt towards the Treaty of Versailles is explicit in Card 170: high above Father Rhine, where the German eagle soars, "Germania" broods, and although her sword is at rest, it is ready -- her hand is on the hilt. The message is clear, and the text makes it clearer: "Never forget the shameful peace of Versailles!"

Partner
Recollection Wisconsin
Contributing Institution
University of Wisconsin Digital Collections
Subjects
Germany
Type
image
Format
Postcard
Language
German, German
URL
https://digital.library.wisc.edu/1711.dl/B5G5OQ26BHWP285
Standardized Rights Statement
Copyright Undetermined:The copyright and related rights status of this Item has been reviewed by the organization that has made the Item available, but the organization was unable to make a conclusive determination as to the copyright status of the Item. Please refer to the organization that has made the Item available for more information. You are free to use this Item in any way that is permitted by the copyright and related rights legislation that applies to your use.