Skip to Main Content
Digital Public Library of America
All items
The political "Siamese" twins, the offspring of Chicago miscegenation

The political "Siamese" twins, the offspring of Chicago miscegenation 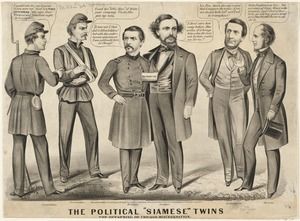 The unlikely teaming of military leader George B. McClellan with Peace Democrat (Copperhead) George Hunt Pendleton as presidential and vice presidential candidates in the 1864 election is ridiculed here. The artist charges McClellan with disloyalty to his former troops by virtue of a "peace at any price" campaign. In the center McClellan (left) is attached to the side of his running mate by "The Party Tie." McClellan says apologetically to the two Union soldiers at his left, "It was not I that did it fellow Soldiers!! but with this unfortunate attachment I was politically born at Chicago!" The Democratic national convention took place in Chicago on August 29, 1864. The soldier with his arm in a sling responds angrily, "Good bye little Mac' if thats your company! Uncle Abe gets my vote," The soldier at far left says, "I would vote for you General, if you were not tied to a "peace" Copperhead, who says that Treason and Rebellion ought to triumph!!" Pendleton addresses the two "Copperheads" at his right: Clement Laird Vallandigham, author of the Democrats' peace plank, and Horatio Seymour, governor of New York and chairman of the Democratic national convention. Pendleton says, "I dont care how many letters Mac writes, if it brings him votes; for every vote for him, count one for me!!" Vallandigham concurs, "Yes Pen, that's the only reason that I support the ticket; if you are elected both Jeff [Jefferson Davis, president of the Confederacy] and I will be triumphant!" Seymour (far right) replies, "With Pendleton as Vice: Val [Vallandigham] secretary of State; Wood [i.e., Fernando Wood, an organizer of the Peace Democrats] in the treasury, and I Govr. of New-York, we will have peace at any price the rebels choose to ask for it." The cartoon appeared late in the brief 1864 campaign.