Molly Pitcher and The Battle of Monmouth 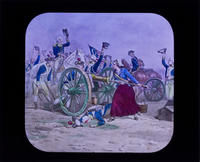 Digitized by the Metropolitan New York Library Council as part of the Culture In Transit project, funded by a grant from the John S. and James L. Knight Foundation. Item number 159

Partner
Empire State Digital Network
Contributing Institution
The General Society of Mechanics and Tradesmen, Museum
Supporting Institution
Metropolitan New York Library Council
Collection
General Society of Mechanics and Tradesmen, Industry and Culture Collection
Subjects
American Revolution (1775-1783)
Monmouth, Battle of (Freehold, New Jersey : 1778)
Lantern slides
Pitcher, Molly, 1754-1832
Location
New Jersey--Monmouth County
Type
image
Format
Lantern slides
URL
http://dcmny.org/islandora/object/gsmt%3A155
Rights
Copyright Not Evaluated - for more info see http://rightsstatements.org/page/CNE/1.0/?language=en The copyright and related rights status of this Item has not been evaluated. Please contact the Society at (212) 840-1840 or archivist@generalsociety.org for more information. You are free to use this item in any way that is permitted by the copyright and related rights legislation that applies to your use. Acknowledgment of "The General Society of Mechanics and Tradesmen" as the source for this digitized object will be appreciated.