A map of New England and New York 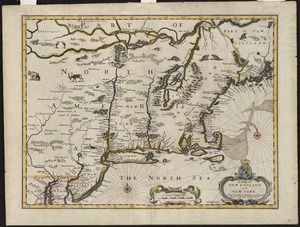 Appears in Speed's Prospect of the most famous parts of the world. London. 1676.

Includes ill. of animals and coat of arms.

This beautifully engraved and colored map represents an English version of the Jansson-Visscher series of maps of northeastern North America. Since it was published shortly after the expulsion of the Dutch from New York, the map displays geographical features similar to those found on its Dutch counterparts. However, the place names New Netherlands and New Amsterdam have been rechristened New York reflecting British control of the former Dutch colony. This map appeared in Thomas Basset and Richard Chiswell's 1676 edition of John Speed's world atlas, first published in 1627.