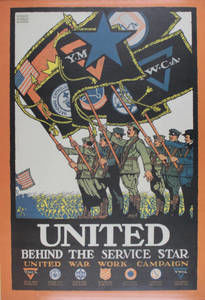 The United War Work Campaign was started when President Woodrow Wilson suggested the separate American relief organizations "united their forthcoming appeals for funds." With the full support of the United States government, they planned to raise a total of $170,500,000 during the week of November 11, 1918 (coincidentally the day World War I ended), which they would then divide pro rata according to the percentage each of their seven budgets represented. At the time, this was the biggest drive for funds ever attempted. The poster’s artist, Ernest Hamlin Baker, was born in 1889 in Rhode Island. He was a self-taught illustrator who produced over three hundred covers for Time magazine during his seventeen-year tenure with them. He was also responsible for eleven covers for Fortune Magazine between 1929 and 1941. Baker became involved in Works Progress Association (WPA) programs during the 1930's.

Scale is not 1:1 because item was digitized using a Canon EOS Rebel T1i. Extent describes frame size and should be updated once poster is removed from the frame; No master file exists as the poster was photographed through glass and is not of high quality; This poster was donated by Ronad G. Gallagher (SC alumnus - 1976) and his brothers, Tim (Class of 1978) and Don (Class of 1975) in honor of Ray Berte, his favorite Springfield College professor.

In this World War I poster, seven soldiers are standing in the foreground and holding flags representing the seven organizations that compose the United War Work Campaign. In the background are soldiers marching and an American flag. Beneath the picture are the words, “United Behind the Service Star – United War Work Campaign.” The emblems for the seven organizations line the bottom: the YMCA, YWCA, National Catholic War Council, Jewish Welfare Board, War Camp Community Service, American Library Association, and Salvation Army.