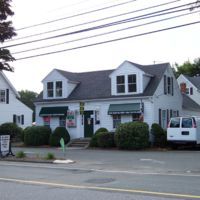 Information about this item was supplied by NOBLE Digital Heritage.

Photos show views of the house located at 354 Salem Street on the south side of the street near the intersection with Lowell Street (known as Reid's Corner). The Greek Revival Style cape was built between 1835 and 1856 and was occupied by a Mr. Pond during the latter half of the 19th century. It is now occupied by Wal's Dry Cleaning.