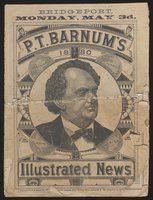 Courier for P.T. Barnum's Greatest Show on Earth, intended for Bridgeport, Connecticut for May 3, 1880. Couriers were a form of advertising that helped to announce the arrival of the circus, usually before it was in town. Some couriers were newspaper sized and many pages long, with extensive descriptions and illustrations of the acts that were a part of the circus. The edition from May 3, 1880 features a black and white illustration of P.T. Barnum himself on the front. Flanking him at four corners are the four corners of the world, each neatly labeled. Inside are two pages that feature writing by Barnum himself that address the patrons and describe the 1880 season. It is meant to demonstrate not only the wonders within, but what has been improved from the previous year's show. Further in the Illustrated News are descriptions of the various acts that the Greatest Show on Earth has, as well as extensive illustrations of animals, Zazel the human cannonball, performing Zulu warriors and their chief, trained oxen, show horses attached to an organ, the trained stag Landseer, six stallions, Madam Nelson and her flight of trained doves, Madame Dockrill and her horse riding stunts, sea lions, and the tattooed man Captain George Costentenus. Additional descriptions of other acts are also included, all to entice the public to go and see the show. Barnum is best known for his involvement with the circus that bore his name, but his circus ventures came about when he was in his 60s. The first show was called P.T. Barnum's Grand Traveling Museum, Menagerie, Caravan and Circus. Railroads propelled the circus to success, making it easier to reach a number of locations, and the intake was significant. Barnum then opened the New York Hippodrome with similar acts. In the 1880s, he encountered competition from other circuses. A merger between Barnum's show and the Great London Show of Cooper, Bailey, and Hutchinson formed the Barnum and London Circus. Negotiations in 1887 formed the Barnum and Bailey circus. The name remained until 1919 when it became the Ringling Brothers and Barnum and Bailey Circus. It came to an end in May 2017 when the Ringling Brothers and Barnum and Bailey Circus ceased performances after 146 years.