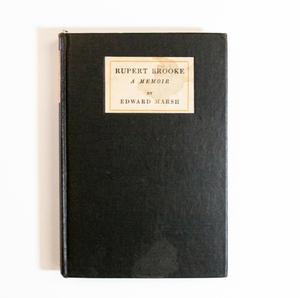 Photograph of the cover of "Rupert Brooke: A Memoir" by Edward Marsh, held by UNT Special Collections. The simple black cover has the title in a white box at the top, the title inside it framed by an orange line. Rupert Brooke (1887-1915) was the son of a Rugby schoolmaster and attended school at Rugby and later at King’s College of Cambridge University. After completing his education, Brooke continued writing poetry and became one of the founders of the first anthology of Georgian Poetry. Now little studied, it was a dominant poetic movement of the time until it was supplanted by Imagism and the High Modernism of T. S. Eliot, Ezra Pound, and W. B. Yeats. While not as experimental as the Modernists, the Georgian poets did look to free poetry from the ornate language of Victorian verse and employ in its place plain and concrete language. Along with the Georgian poets, Brooke also interacted with members of the influential Bloomsbury Group, which included such prominent writers as Virginia Woolf and E. M. Forster. When war broke out, Brooke enlisted but never saw combat, instead dying of illness in March 1915 on his way to Gallipoli. Despite this, Brooke became a touchstone for other WWI poets, who dedicated volumes of verse to him, wrote essays celebrating his work, and published memoirs of his life. Rupert Brooke’s most anthologized poetry is often selected to represent a more inspirational and conventional perspective than the soldier poets that follow him. The patriotic sensibility in his most famous poem “The Soldier,” for example, is often contrasted with the disillusionment, horror, and lack of sentimentality of other WWI poets. This is not surprising, considering that Brooke did not see combat, but it has had unfortunate consequences for Brooke’s reputation and much of his best poetry has been neglected. It is important to see the overt nationalism of his self-characterization in “The Soldier” as “A body of England's, breathing English air, / Washed by the rivers, blest by suns of home” in the context of the rest of the volume, particularly the poems of 1913-1915, when Brooke traveled across North America, to Hawaii, New Zealand, and finally Tahiti. In the progression of 1914 and other poems, the certain knowledge and stable geography of “The Soldier” gives way to the dark scents and murmuring of the “soft Hawaiian sea” in “Waikiki,” and in “Hauntings,” Brooke presents a less certain vision of human destiny. In the sonnet’s octave, “a shade, through the toss'd ranks of mirth and crying / Hungers, and pains, and each dull passionate mood,— / Quite lost, and all but all forgot, undying,” comes back to haunt the speaker’s “quietude.” This haunting presence transforms the speaker himself into a “poor ghost,” one who, “Is haunted by strange doubts, evasive dreams, Hints of a pre-Lethean life, of men, Stars, rocks, and flesh, things unintelligible, And light on waving grass, he knows not when, And feet that ran, but where, he cannot tell.” In this context, Brooke’s celebrations of patriotic duty in war are tempered by a more reflective and less confident poetic sensibility.