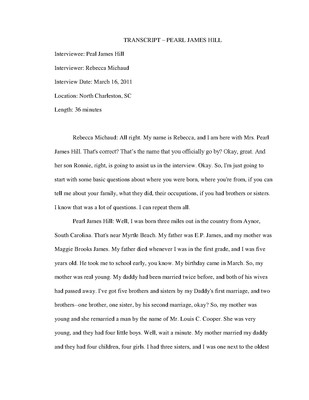 Pearl James Hill was born in 1925, in Aynor, South Carolina. One of fourteen children, she was orphaned at age thirteen, and lived with various family members until she turned sixteen and moved to Charleston. Hill worked at the munitions factory manufacturing hand grenades. Later, she became a ship welder, and worked at the Naval Shipyard until WWII ended in 1945. She then briefly worked at American Tobacco. In this interview with Rebecca Michaud, Hill reflects on her childhood, work at the munitions factory and the ship yard, and the Japanese attack on Pearl Harbor.