You buy a Liberty Bond lest I perish 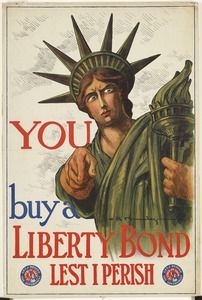 To publicize the first bond drive, three posters were initially prepared, and each of them featured the Statue of Liberty. War loan posters were the largest category of posters produced during the war. The loan campaigns placed less emphasis on the investment value than on the opportunity for civilians to aid the war effort directly.

Image of Statue of Liberty pointing outward in an effort to encourage U.S. citizens to buy government bonds during wartime. Logo beside title says, "Get behind the government. Liberty Loan of 1917."