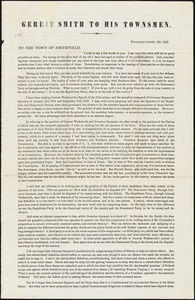 In this typed letter addressed to "the Town of Smithfield, [New York]", Gerrit Smith acknowledges the toll the American Civil War has taken on the community and asks them to vote for the Republican party in the coming election for New York governor, asking, "Is it not the Republican Party, that is on the side of the country?" He compares the Republican and Democratic parties views of the war, using speeches by the two candidates for governor, Republican General [James S.] Wadsworth and Democratic Governor [Horatio] Seymour. Smith then discusses the preliminary Emancipation Proclamation and the conduct of President Lincoln, arguing that "there is no other way in which they can sustain him [President Lincoln] so effectively as by making the majority of James S. Wadsworth for the office of Governor of the Empire State exceeed one hundred thousand."