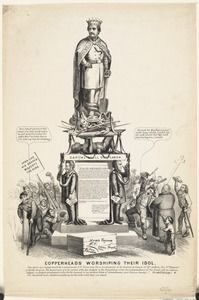 Election of 1864. A cartoonist's view of what would happen if George B. McClellan the Democratic candidate won the election. Although he tried to disclaim it to some extent, McClellan was saddled with the Chicago platform that called for peace at almost any price; a platform written by the "Copperheads," a group of Northern Democrats who would fight to free the Union, but not to free the slaves. In any case McClellan was defeated by the incumbent, Abraham Lincoln.