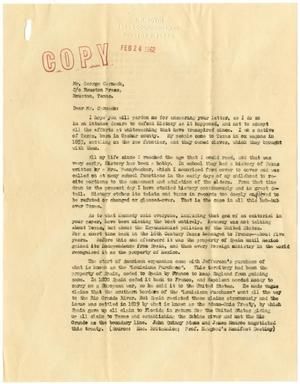 Copy of a letter to George Carmack from A.D. Covin in response to an editorial in the Houston Press about a statement made by Robert Kennedy about Texas and its annexation. Covin claims that Kennedy's comments were critical of the expansionist policies of the United States, and not the annexation of Texas. Covin claims that the article is overlooking some historical facts (on which Kennedy's comments are based), namely that the United States instigated the Mexican War and forced Mexico to cede Texas to the United States in pursuit of Manifest Destiny.